On Wednesday, June 13, the BISSELL Pet Foundation hosted nearly
800 animal lovers and their canine friends, in many shapes and sizes, under picture-perfect skies to raise money and awareness for the homeless pets of West Michigan. The 7th annual BISSELL Blocktail Party® attracted a record breaking crowd on the lawn of Mangiamo!, a Gilmore Collection restaurant located in East Grand Rapids, MI.

The true winners of the evening were the many homeless pets that will benefit from the outpouring of generosity at the successful event. Over $187,000 were raised at this year’s party, surpassing the fundraising goal.

Created and organized by a group of animal advocates with years of combined experience in the animal welfare world, the BISSELL Blocktail Party is touted to be the BEST DOG-GONE Party in Town, and this year’s event lived up to the name. Gourmet “yappetizers” were served to both human and canine guests alike,

as the like-minded animal lovers mingled and contemplated over which unique, silent auction items to bid on. Top hits in this year’s auction included artist Dale Rogers’ American Dog sculptures, a week-long stay at a beach front condo in Jaco, Costa Rica and a hot air balloon ride for two, just to name a few.

New to this year’s event was a Photo Booth opportunity for guests and their pooches, provided by TerpstraPhoto.com. The booth was a hit, with a constant stream of guests waiting for their turn to dress up their dog in fun costumes and props and have their photo snapped at no charge. 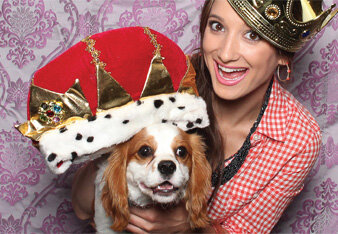 After the last drink was served and the auction was closed, it was obvious that the true winners of the evening were the many homeless pets that would benefit from the outpouring of generosity at the successful event. Over $187,000 were raised at this year’s party, surpassing the fundraising goal of $150,000. All proceeds will benefit local animal welfare organizations through BISSELL Blocktail Grants. The BISSELL Pet Foundation received grant applications from 11 local animal welfare organizations before the June 1 deadline, and awards will be announced in the coming weeks.