Foster failures, we’re talking about you! You know who you are. You bring a pet into your home, sometimes one who needs a little TLC to recover from injury or illness before going to a shelter, and while you are fostering, you fall in love! BISSELL Pet Foundation loves a good foster failure story. In fact, our founder, Cathy Bissell has failed a couple of times herself! It’s almost an occupational hazard! One of our favorite Empty The Shelters moments at BISSELL Headquarters in October was a foster failure at the very end of the day.

Winston is one lucky guy. He had been in a kill shelter in the south and was fortunate to be saved by caring rescue workers who helped him find his way to Unleashed Love in Michigan. Julie had been fostering Winston for two weeks in her home, where both of her dogs bonded with him, and more importantly, so did Julie’s 18-year-old daughter, Sam. 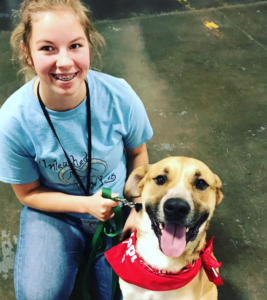 Sam and Julie were at BISSELL HQ with Winston helping to get him adopted during Empty The Shelters, although truthfully, Sam was hoping no one would want to take him home!  Sam and Julie made a deal before the day started that if Winston didn’t get adopted, she could adopt him as her very own pet.  Winston, an adorable, young dog, won the hearts of many potential adopters. Several people had been seriously considering him during the day and Sam began to get worried and sad. Happily, for Sam, none of the other adopters worked out. Near the end of the event, Julie stuck to her word and agreed that Winston could become Sam’s very own dog. Sam had her first experience as a ‘foster failure’ and, at 18, was the youngest official adopter!

If you are a foster failure who has adopted during one of BPF’s Empty The Shelters events, we’d love to hear from you!  Send us your story at info@bissellpetfoundation.org.