What feels better than a nice Bath? A nice bath AND being adopted! 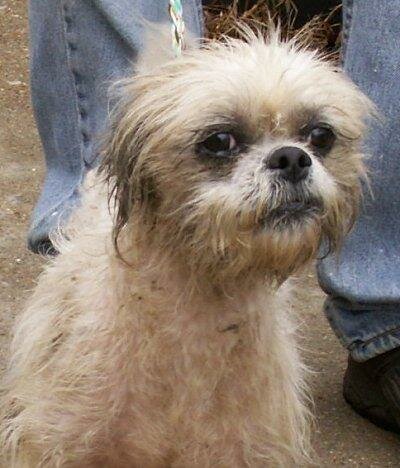 The Good Shepherd Humane Society is a no-kill shelter serving Carroll County, Arkansas. Animals who come through their doors stay there until they find a forever home, sometimes that can be days and sometimes that can be months.  Good Shepherd knows keeping the dogs and cats well groomed can help their chances of being adopted. Their policy is that all dogs (and many but not all cats) must be bathed upon admission. They also receive flea/tick medication as both are prevalent in the local community. The shelter reached out to the BISSELL Pet Foundation for help and received a grant to purchase a new grooming tub, grooming supplies, and flea/tick medicines.

One little Shih Tzu mix surrendered to the Good Shepherd Humane Society particularly benefitted from the BISSELL Pet Foundation award.  The people who surrendered him to the shelter coated him in motor oil leading him to affectionately being named “Castor Oyl”.

Castor was a horrible mess; missing most of his hair, his owners assumed he had mange and used an old home remedy to try to cure it. Good Shepherd had to bathe him about three times in dishwashing liquid to get the oil off of his little body before they could even begin to treat him. Unfortunately, he had horrible flea dermatitis and a skin infection. He spent several days getting baths, first to get rid of the oil, then baths with oatmeal shampoo to soothe his skin.  Castor remained in the shelter two months before someone special scooped him up. What a difference a loving home has made in his appearance and health!

Thanks to a BISSELL Pet Foundation grant 1,030 animals like Castor Oyl were groomed and received flea/tick medication getting them one step closer to finding their new forever homes!

The BISSELL Pet Foundation is a charitable 501(c)(3) non-profit organization with a mission to help reduce the number of animals in shelters and to support organizations dedicated to the humane care and treated of animals through pet adoption, spay/neuter programs, microchipping and foster care. Founded in 2011 by Cathy Bissell, the BISSELL Pet Foundation is an extension of her long-standing love for animals and commitment to their welfare. The foundation is supported to BISSELL Homecare, Inc., a 137-year-old Grand Rapids-based floor care appliance brand in its fourth generation of family leadership.