When Love is Not Enough...

Nearly every day at the BISSELL Pet Foundation (BPF) we hear about the work of groups and individuals across the country who need help to provide necessary care and treatment for homeless pets in their community. It’s not a question of whether or not these compassionate people love the animals in their care, they most certainly do. It is simply a matter of resources. With an estimated six to eight million animals entering shelters and rescues each year 1, there is sadly not enough time, space, people and funds to save them all. This is where we step in. 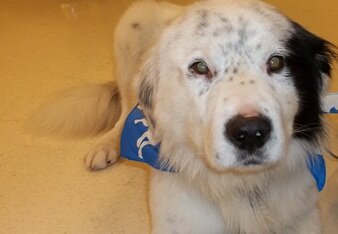 Recently, BPF heard about the plight of a dog at our local animal shelter. He had spent the majority of his life chained outdoors, lacking the love of a family until Animal Control rescued him and nine other dogs from their neglectful environment. “Kory,” was not a dog who would typically do well in a shelter environment due to his lack socialization. On top of being fearful, it was soon learned he had Heartworm Disease, and because of this, it became difficult for them to find a rescue group to take him. Why? Not due of a lack of love, but a lack of resources. Kory needed special attention to prepare him for a life in a home and the treatment for Heartworm Disease is expensive. For many dogs across the country, the road would end there, but luckily Kory has a different story.

“I’m so happy he had a second chance. Kory’s a great example of how amazing dogs can be at keeping trust in humans no matter what they’ve been through.” Carly Luttmann, Program Supervisor – Kent County Animal Shelter

BPF reached out to the Kent County Animal Shelter offering to pay for all of his medical needs. Now, on Valentine’s Day, he has learned what love is. He has made it through treatment with flying colors. His tests show he is a healthy dog, and only time will tell if his heartworm treatment was successful. He is now enjoying the love of the staff who have seen him through his transition from an outdoor dog into a pet. This weekend he will be meeting a potential new family in hopes of beginning the next and final chapter of his life.

We wish Kory’s story was unique. We wish we rarely heard stories of animals suffering. We wish all of the rescues and shelters around the country had the needed resources to change the outlook for the lost, abandoned, abused and neglected animals which end up on their doorstep. The sad reality is that most dogs like Kory don’t get a second chance and never experience the security of a loving family, but that is why we exist. The BISSELL Pet Foundation is here to provide hope and resources for these animals when love is just not enough. More than 28,000 shelter pets were impacted through adoption and transport during the nation’s largest funded adoption event.

Rethinking the Narrative When Marketing Shelter Pets for Adoption

Cathy Bissell shares her insights on how to rethink the narrative of the marketing of pets in the animal welfare industry.